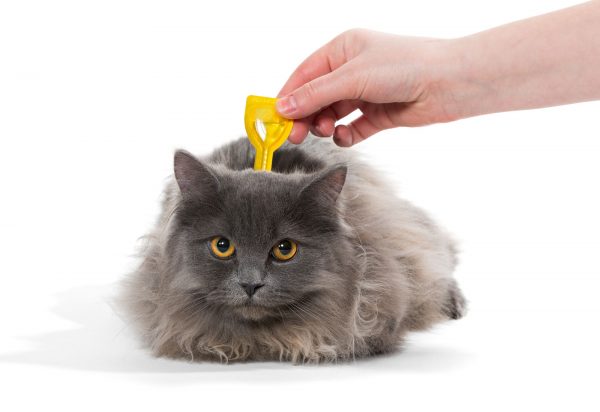 Cat Flea Treatment and Control is the number one flea problem in the western world. The secret to winning is prevention…

What you’ve heard is true!  Feline fleas have displaced the human and dog flea to become the most successful external (skin) parasite in the home.

Getting rid of cat fleas has been made even more difficult since they adapted to living on rabbits and rats, marsupial possums and wallabies, and other unrelated furry species!  (Cats have also taken over the Internet – it is now the feline variety of puss-cat that is uploaded in huge numbers every day!)

Similarly, when an owner cries “my cat has fleas!” then cat flea medicine for cat flea (and tick) control becomes a discussion vets have multiple times daily.  Every cat and household is different, so flea treatment for a cat has to be customized for the cat, the owner’s capacity, finances and capabilities and the environmental ‘load’ (95% of fleas are in the environment – especially near where furry pets sleep).

Cat fleas do bite humans but since there is nowhere on us to hide (the feline flea is hugely photophobic – it runs from light as fast as it can!), then they have a feed and hop off to find another warm and furry host, or lay some eggs as soon as possible.

What makes a flea hop? A shadow passing in front of the flea will make it hop towards the shadow.  It is a pretty good bet for a flea that, at ground level, something big enough to throw a shadow is going to be a moving blood meal – and the amazing spring reflex gets them onto the ‘feed station’.

The flea can survive in the environment for up to a year once hatched (two years if it stays as an egg!), but once a flea feeds, it has to get regular blood meals or it will die (autodigest – the flea’s digestive fluids will consume it!) within three days.

The choice of cat flea medicines is wide

The following cat flea medicines use the ‘cat as chemical vacuum’ principle.

Fleas hopping on the cat are killed and are therefore prevented from laying any more eggs to contaminate the environment. They are usually topical (applied to the cat’s skin directly) but some are oral cat flea treatments.

New products are being developed regularly because of the mutation issues mentioned.

In addition to Cat Flea medicine, your Flea Control efforts will work more quickly adding in these Insect Growth Regulators (IGR’s).  It is also far better to remove the source of the problem – the environmental ‘load’ than to use the cat as a chemical vacuum – especially if the cat has a flea allergy.

IGR’s decontaminate the environment by using only ‘flea egg control’.  It is much easier to kill the flea egg than the flea adult, and the majority of the flea population (95%) is hanging about as eggs, larvae and pupae in the environment, waiting their ‘turn’.

The main IGR’s are Methoprene and Pyriproxifen which are topical (can be applied to the skin).  Program (lufenuron) is oral or by injection (in cats). Another option is external treatments containing Nematodes (a microscopic worm) which kill the flea eggs and larvae before they even reach your cat.

Dog flea IGR medications are often combined with heart worm preventatives and other worming or dog flea and tick medications.