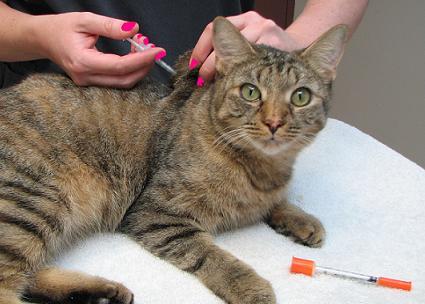 Cat Diabetes Symptoms vary from no outward signs to lethargy, weight loss and change of appetite, to deep coma, seizures and death. Reading the signs will make all the difference to her health and wellbeing.

There is no typical, diabetic cat, and the diagnosis usually comes as a surprise to owners (and sometimes to vets as well).  Typical to many things in the cat universe, feline diabetes is difficult to diagnose and frequently a problem to control.  And since the cat quite often just stops being diabetic for variable lengths of time, the prognosis is as individual as the cat!

There is no single symptom that manifests either.  Believe it or not, they vary from no symptoms at all, to the classic diabetic feline ‘drinking and urinating a lot  (PUPD in the jargon) with ravenous appetite’ to ‘skinny sick cat’.

Here’s an example of the confusing options…

There are also other features or diseases associated with diabetes in cats, which means that there are often combinations of problems going on in the same cat and these obviously cloud the diagnostic picture.

The increased urine is really what you will notice first because the litter has to be changed more often!

The glucose in the urine is also an excellent source of nutrition for bacteria, so urinary tract infections and bleeding from the bladder are also quite common in diabetic cats.   This makes them urinate more frequently, with great volume, so both owner and cat become litter tray obsessed, or the cat will start peeing outside the tray.  It is just too wet or too painful to pee in the tray anymore.

As an example of the challenges a vet can experience, three of the diabetic cats I’ve seen have presented for cystitis – urinating outside the litter tray with blood in the urine.

Maybe it was the only way they could draw attention to their problem!  Now I make sure I test the urine of all cats who change their litter tray habits!

Why cats with diabetes drink and eat more, lose weight

Interestingly, the driving mechanism for the clinical signs is the urine and not the drinking, as one might assume.  Diabetics must drink large volumes of water because the excess glucose in the blood (no insulin to remove it for use in the tissues) gets filtered into urine by the kidneys.  Because glucose draws water with it (think of clumpy sugar in hot weather!), then water from the body is also dragged into the urine, so the body dehydrates.  Therefore, the cat has to drink more to counteract that effect.

The weight loss occurs because the glucose is the main source of calories for the body’s metabolism, and the calories in glucose are being eliminated uselessly in the urine.  The initial digestive processes are unaffected, so food which goes into the cat is still digested, but most of it comes out again as glucose in the urine.

Basically, the cat cannot eat enough to maintain its body weight, so there is weight loss along with increased thirst.

But as I have already said, there are traps when diagnosing whether a cat has diabetes.  Even vets can be tricked.

How to confirm feline diabetes

The easiest, and most common way to identify diabetes in cats is simply by routine or random urine (and blood) tests.

Waiting till a cat shows cat diabetes symptoms (especially by the time they stop eating or go into a coma in ketoacidosis) makes it much harder for treatment, and creates a poor prognosis (long-term outlook for health).  This is because their metabolism is so deranged they are producing ketones in their blood and urine.  Diabetes in cats in becoming more common, and is one of the reasons health checks, especially for older cats, is so important.

A test in time may save (nine!) lives!

Managing if your cat has diabetes

The diagnosis of Diabetes Mellitus in cats is not a death sentence, but it can be a lifetime gaol term.  Not everyone has the lifestyle to accommodate a diabetic cat, but for those who embark on treatment, the outcome can be very rewarding.

There are veterinarians who are feline diabetic specialists who are also accessible for the “fine tuning” and individual regimes that many treatments seem to need, especially for the felines who are insulin resistant!

There is also a feline diabetes message board – an internet-based support group for owners of diabetic cats, so you are definitely not alone if you, the owner, the vet and the cat want to maintain treatment.

As I have said above, we usually think that the increased food consumption that accompanies the early stages of diabetes is just the cat training us to open more tins or give them more food in their bowl because they like us! …or the food!

Interestingly, some fat and/or diabetic cats can be managed for a long time just with special diabetic cat food.  The cat diabetes diet is based on the Atkins Diets (so we call it the Catkins Diet!).

High protein, moderate fat and low carbohydrates suit the carnivorous lineage that Felis cattus, your little Tiger at the Fireside, traces back to! Discover more…

Creating a chart of your cat’s weight will help you really keep track of any changes.  Discover how easy it is to weigh your cat on a monthly basis and how it helps your vet.

What causes diabetes in cats?

This is the billion dollar research question, of course.

The simplest explanation of diabetes in cats goes like this:

Insulin is a hormone produced in the pancreas (part of the digestive system) which allows most of the body’s tissues to extract glucose from the blood traveling through them, and absorb it into the cell where it is used as an energy source for the cell to survive, grow, and do its particular job.

The insulin also affects other major organs of metabolism such as the liver, and assists in its production of the right kind of energy (fat for storage or glucose to burn now).

Diabetic cats have no (or low levels of) insulin, or the cells fail to let the insulin in (insulin resistant), so their energy metabolism becomes deranged.

So far, only risk factors and classifications of types of diabetes in cats have been identified, but the hunt continues.  However, the statistics are quite interesting, and  our feline friends seem eerily close to humans.

One in 400 cats will get diabetes, but 15% will stop being diabetic (although they remain prone to it).

There are two types of human diabetes:

Another situation is that there is enough insulin being produced but the tissues that need to use the insulin are resistant because the insulin cannot help the cell take the glucose from the blood.  This means that diabetic cats can sometimes be helped with tablets which stimulate the remaining pancreatic tissue.

About 50% of diabetic cats respond for at least some of the time to oral hypoglycaemics (which are also used in humans) or to diabetic cat food.  Dietary modification (if you can convince the cat to change) is useful even if the cat needs insulin, as the higher protein content of diabetic diets for cats means less work for the insulin-producing cells of the pancreas.  The pancreatic cells are rested and then start functioning fully again, and this is also the reason some cats stop being diabetic or at least stop needing insulin or any specific diabetes treatment.

The role of Amylin in causing diabetes

There is another hormone that has recently been put under the microscope as being involved in the process of causing diabetes, but its role is not clear.

The hormone is called amylin, and it is produced in the same pancreatic cells as insulin (the beta cells), and is even stored in the same granules to be released at the same time as insulin.  Amylin seems to directly oppose the actions of insulin, and also to destroy some of the beta cells themselves.  The amylin in humans, cats and primates is similar in its ability to disrupt beta cell function, thus (we think) causing the Type II diabetes, whereas this effect is not seen in dogs and rats.

“Stress” is also increasingly being labelled as destabilising some cats who are diabetes-prone.  It has been shown that cortisone administration – per se – does not create diabetics, but it will unmask diabetes earlier in the diabetes prone cat.

Since allergies seem to be becoming more common in all the mammals in the western world (us humans included), the cortisone/diabetes juggle in cats can get tricky over time.